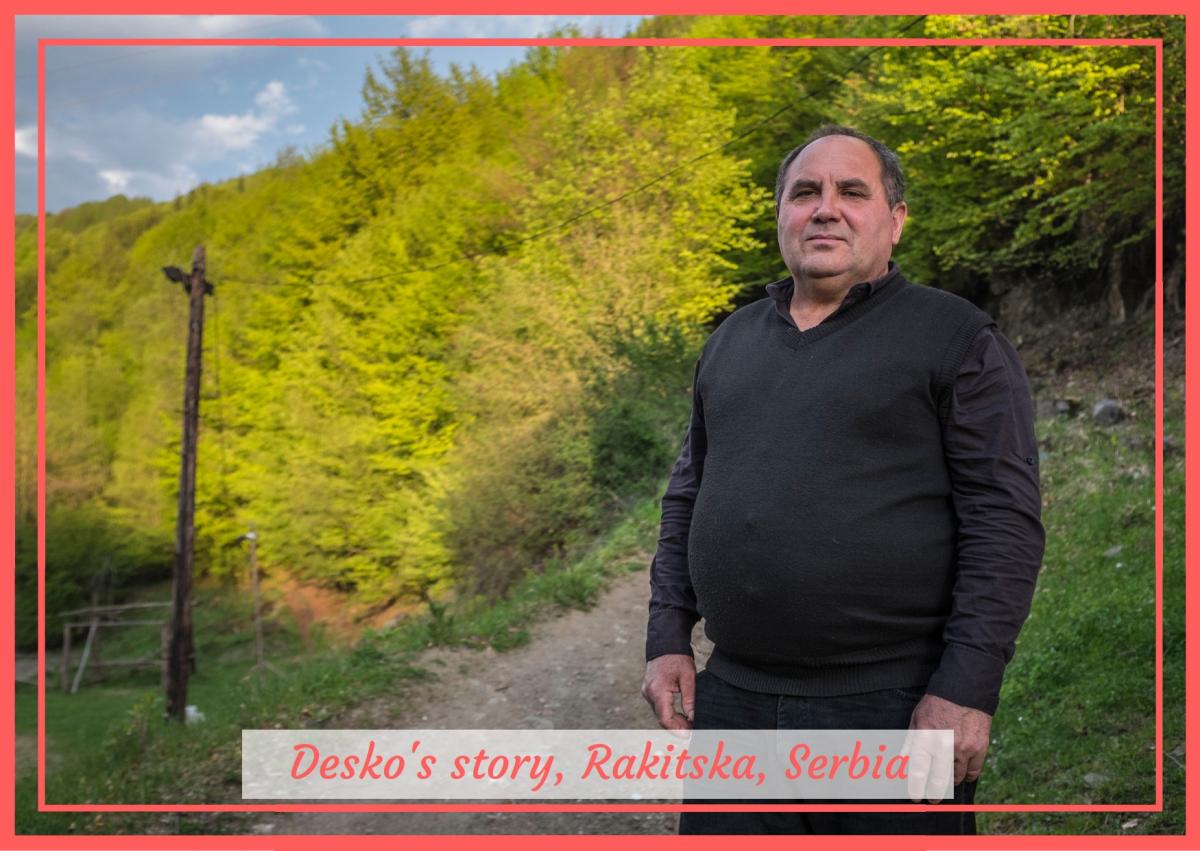 Desimir Stojanov - “Desko” as he is know to family and friends - never thought he would end up on national television. Certainly not for standing up for something he loves. Now in his 60s, he has lived here all his life. His ancestors, he says, lived here during the Ottoman empire, 300 years ago. He’s even got some papers somewhere to prove it. He and his wife, Zorica, used to live a quieter existence in their small village of Rakita, close to the Bulgarian border in south-eastern Serbia. They remember more peaceful times, before the investor from Belgrade came to dig up their beloved Rakitska river. Their life is less quiet now.

Desko has seen firsthand the destruction caused by other small hydropower plants in the region and he doesn’t want to see the same fate here on the Rakitska.

The Rakitska River is his village’s lifeline. Desko, who is is also the president of the local council, has involuntarily become a leader of local opposition against a hydropower plant being built on this lifeline right in the middle of the village. He understands that this will kill the river and that the villagers will no longer be able to water their crops or fish or swim there. He even knows about the threat to endangered species in the river. Desko has seen firsthand the destruction caused by other small hydropower plants in the region and he doesn’t want to see the same fate here on the Rakitska. He describes small hydropower plants as the “root of all evil” in the region”. 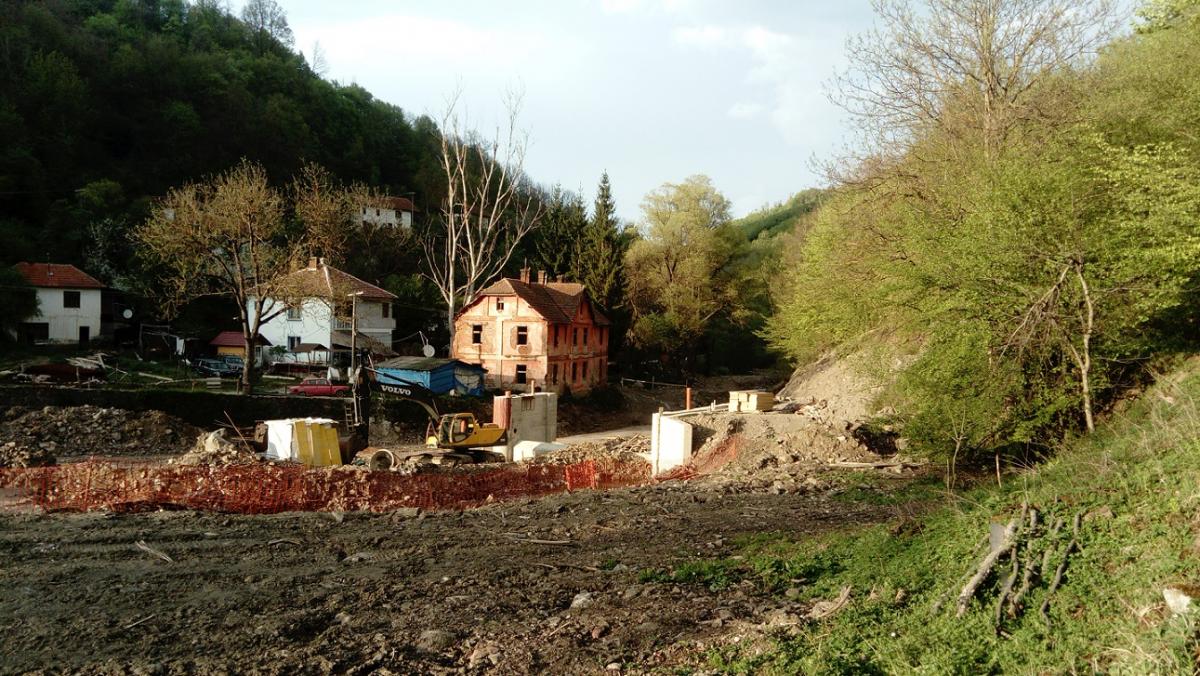 They stand with other villagers in front of the old cultural centre. Hosting art inside in its former life, today the outside wall of the centre hosts a mural “The River Guardian”, which overlooks the sad, mangled construction site in the centre of the village. Desko and Zorica watch as the unsightly security guards shepherd construction vehicles onto the work site. Zorica has been constantly subjected to their verbal abuse. Desko has been physically assaulted by them. Even though the project has started, and huge construction vehicles now drive up and down the river bed, the villagers are committed to stopping it with non-violent direct protest. Some of them now joke about how many fines they have received from obstructing the construction. 60 kilometres away, the court of Babušnica is overflowing with charges against Rakita’s residents. Fines are higher than their pensions. The police and security surveillance is omnipresent and the intimidation of locals is heavy-handed. Dragan Iliev, Desko’s neighbour and friend has experienced the extreme of this abuse. He is not only opposed to the plant because it is destroying the river, he has also been threatened to be sued if he approaches his family’s land, which was partially torn down and destroyed by the construction machines. Tragically, in 2018, in one of the early morning surprise police raids, Dragan’s elderly mother, who was in the house at the time, died of a heart attack.

The investor has no connection to the village except to milk the river for money. According to Desko and others who want to protect the river, the investor simply wants to construct the dam to access the hydropower subsidies to build himself a money printing press. When the construction first started, not all the licences were in place and the project continues to be built in different parts. The investor has lost the licence for one piece of the project, but then starts something else and asks for the licence back based on what he just built. Recently, he was ordered by the Serbian Government’s Ministry of Environment to remove pipes that have been illegally laid in the river bed. To date, he has refused to obey the legal order and the pipes remain in there for all to see.

When asked whether he has faith in his country’s institutions, Desko is fairly forthright. He knows these rivers will be saved with the sheer weight of people’s physical bodies, not because of a sudden change of heart in Belgrade. Although he understands it won’t be easy, he says we must use our power of numbers first, and eventually the politics will follow. In the meantime, he urges investors in the European Union to stop investing in hydropower in the Balkans, as the costs to nature are simply too great. 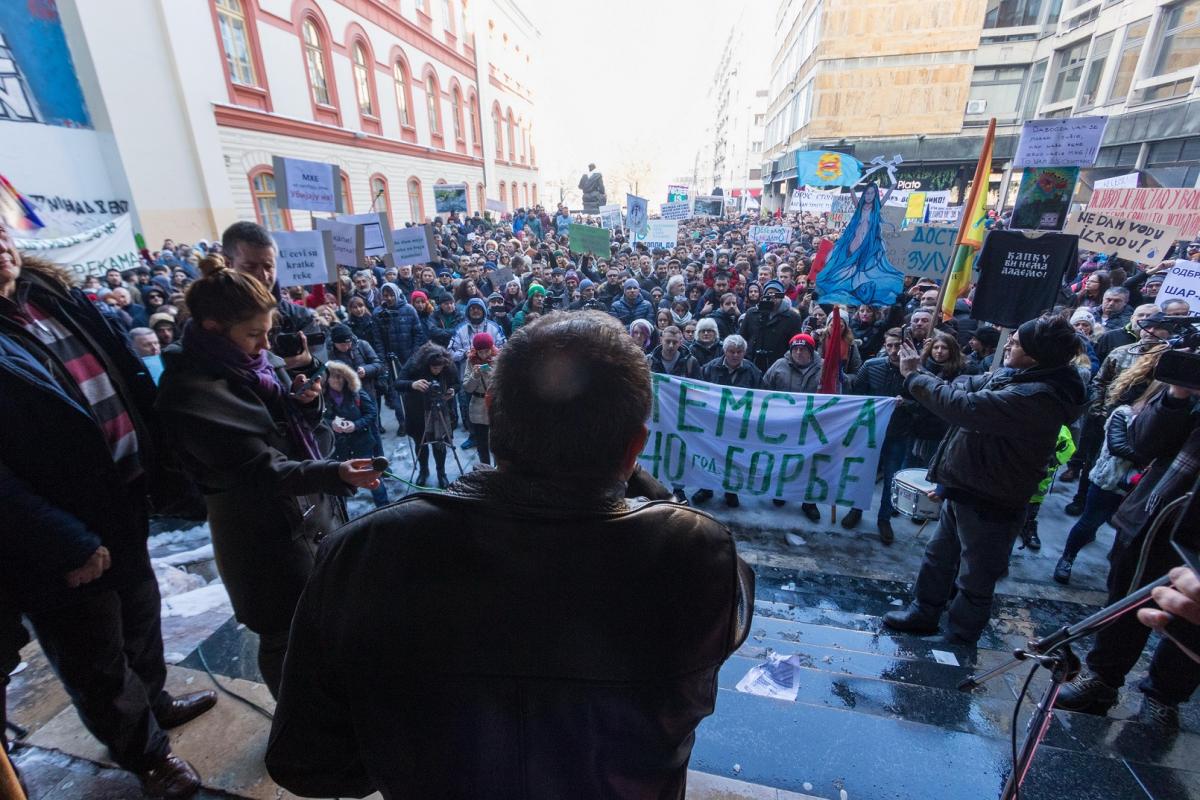 Desko’s staunch opposition to the Rakitska hydropower plant has captured the attention of a wide audience, and he has been invited on national television to argue his case against the project. He is confident answering the questions about the loss of biodiversity, the destruction of the river, the impact on fishing and recreation, the police intimation and the chaos in the village. They are the reasons he is opposed to the plant, and they are the easy questions to answer. The discussion, though, always turns to something very personal that is much harder to talk about. Where he and his wife would go to light a candle on special occasions in memory of their young son, who died tragically at the river 35 years ago, there is now a security fence blocking their way.

When asked what would happen if they win their struggle against the hydropower plant, Desko’s eyes light up. “We would get a trumpet orchestra playing, we would dance the kolo. It would be a celebration to be remembered for generations. When that festive day comes, we would gather everything and everyone for that day. Everyone would be celebrating like they never have before. Down the river, in the next two villages, they will hear us.”