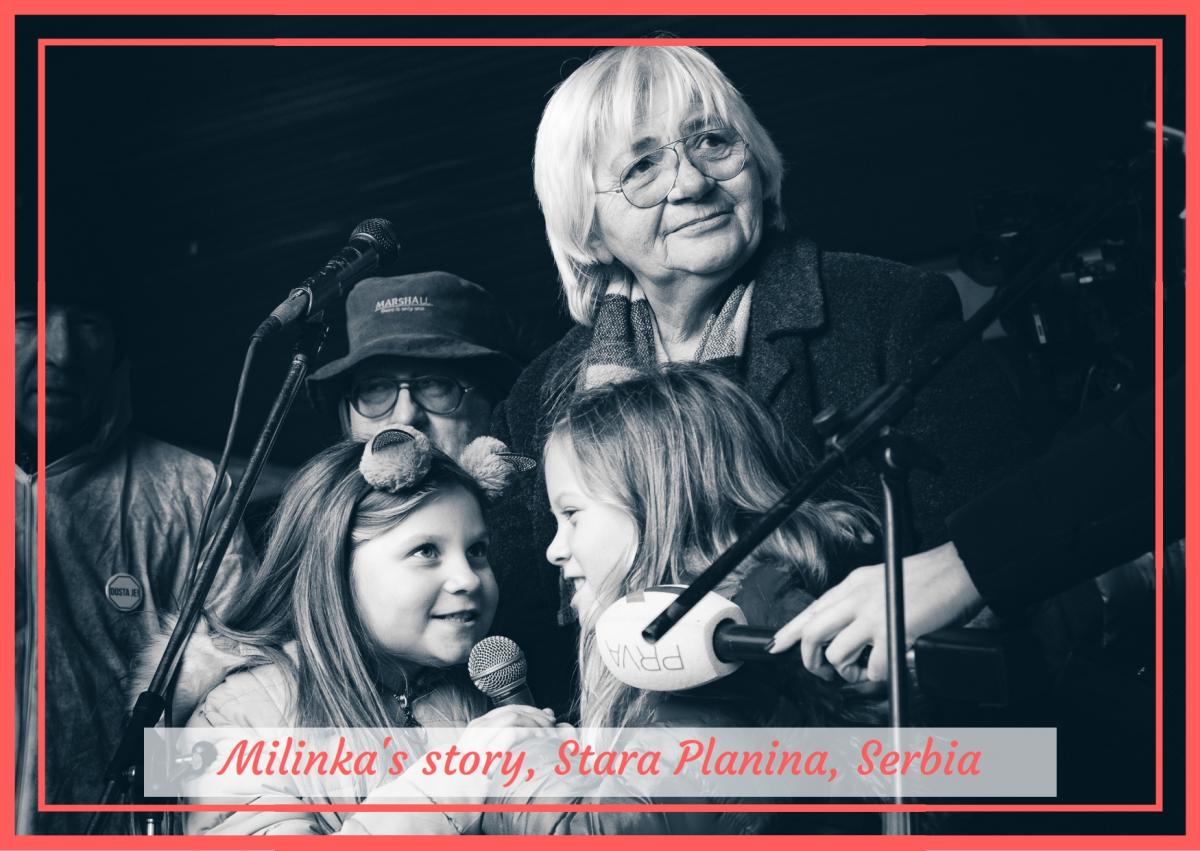 The two young girls - her grandchildren - recite the poem aloud. Their voices are soft, but still, their words hush the surrounding crowd. Thousands of people huddle together in respectful silence. When the girls finish, however, the crowd erupts in raucous cheers. Some hold back silent tears and most let out loud shouts of defiance against that which threatens them. They are united by these children, by their grandmother, and by the rivers of which they speak. Although a little too young to really understand what is happening around them, there is one thing the two girls know for sure. Their rivers are very special and they stand proudly beside their grandmother who has pledged, along with the rest of the crowd, to fight and protect them.

Milinka Nikolić grew up and lives in the small village of Temska, at the foothills of the Stara Planina (Old Mountain) Nature Park in south eastern Serbia. Her house sits up on the Liska Rock, and from her backyard, she can hear her river down below. The Temštica River flows from a confluence of sources within the Stara Planina Nature Park high up in Serbia’s longest and largest mountain range. These mountains harbour rich cultural and natural biodiversity values that are historically and ecologically significant.  Over 1000 species of plants, over 200 species of birds and an incredible 166 species of butterfly call these mountains home, making them one of the most biodiverse mountain systems on the entire Balkan peninsula. Important karst systems, canyons, waterfalls and forest, grass and peat communities all rely on healthy river systems that meander through these old mountains. These details, though important to Milinka, are by far not the only reasons she is driven to protect the rivers of Stara Planina.

As a child, the river was Milinka's backyard. Everyday, she would play with her friends at the Temštica. Everyone in her village grew up in and around the flowing waters and although a long way from the sea, they all learned to swim here. Milinka made her life-long friends on the Temštica and it was at the river where the important gatherings of the village would take place. Last New Years Eve Milinka and friends celebrated at the river by a bonfire in the freezing night air. Upstream from her village, there is a beautiful deep canyon - the locals call it the “Little Colorado” - that is close to the heart of every “Temštanin” (the residents of Temska). The river’s abundant populations of fish also taught her a love of fishing, and Milinka became a keen fisherwoman, even winning national and international competitions. Her son and a daughter have taken after her, and both spend much time fishing on the river. They live in the nearby town of Pirot, but along with their own kids, they regularly come “home” to Temska. 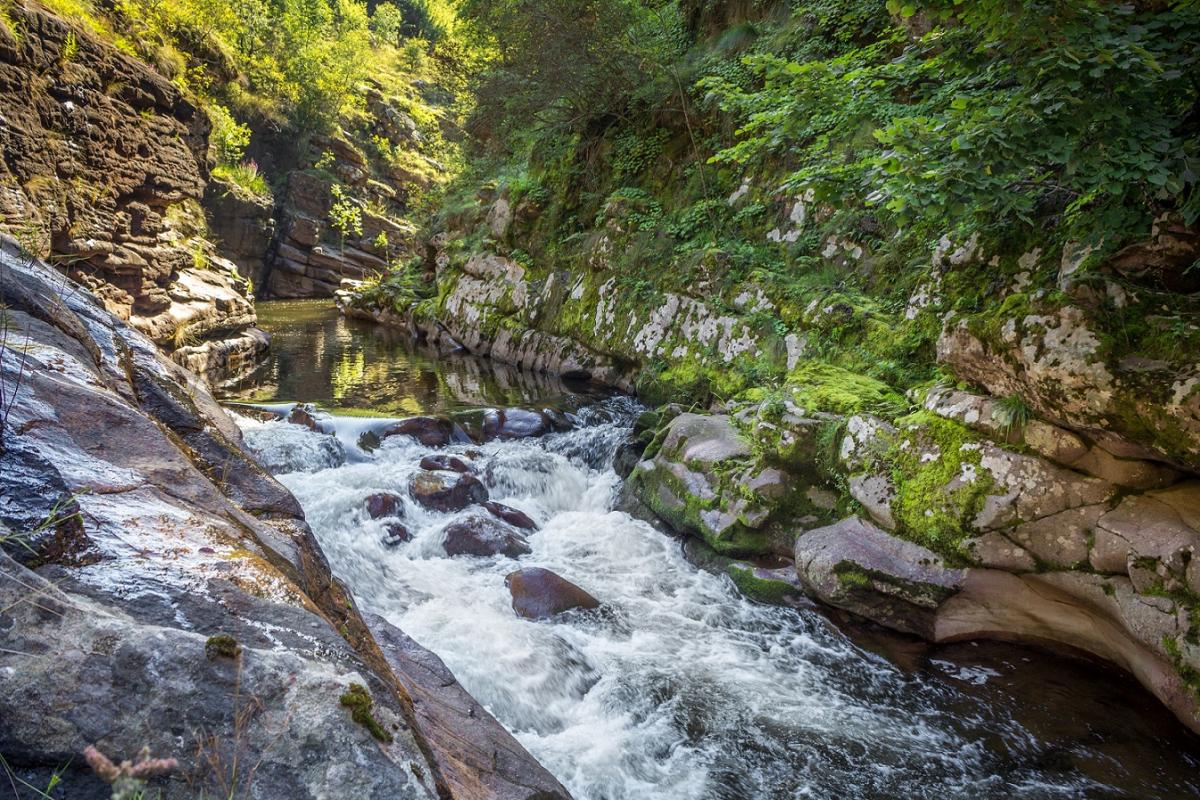 The Temštica is one of many rivers that are the lifeblood of the mountains of Stara Planina. However, these rivers are under enormous threat. Plans for 58 hydropower plants have been drawn up to turn the park into an electricity factory. Two plants have been recently completed and the hydropower companies and their investors are planning more. What they had not planned on, however, is the resilient opposition from people like Milinka and others in her community who have the rivers in their blood and will stop at nothing to save them.

Milinka and others who have lived in the area their whole lives are no strangers to the river destruction caused by dams and river diversions. They started the local struggle against hydropower in Stara Planina almost 40 years ago.  They have had some losses - part of the Visočica River was diverted decades ago to form the Zavojsko reservoir - but the community is fiercely united against further hydropower expansion. Hidden behind Milinka’s endearing smile is a cunning ability to inspire and organise. Milinka has helped unify 39 local villages in opposition to hydropower in Stara Planina and she has been central to the formation of the Defenders of Stara Planina Rivers (DSPR), an informal organisation that has support and active participants from around the country. The DSPR comprises ordinary people of all ages living ordinary lives doing extraordinary things. They believe in the power of people to make change from the ground up and they meet and organise and support each other against the sheer economic power of investors and an antagonistic government. Recently, two members of the group were fined for “holding an unlawful protest” at the river when what they were actually doing was cleaning up the river. Milinka knows that things can become worse before they get better. 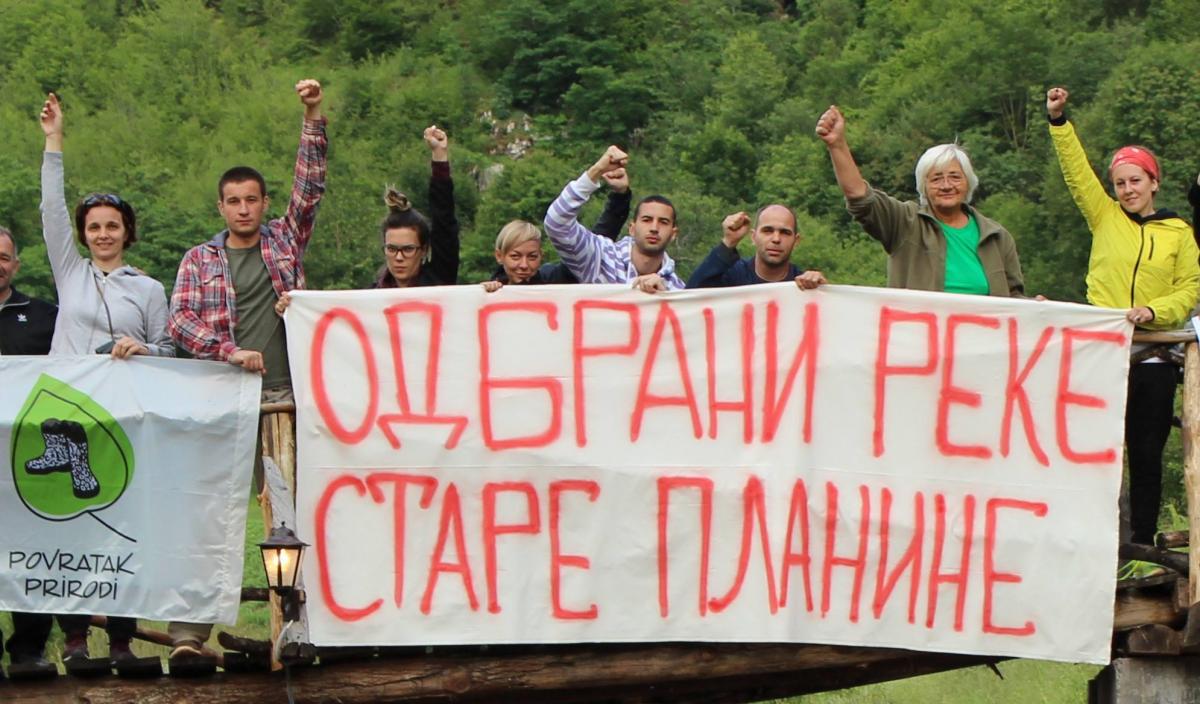 Recently, over 1000 people attended a protest in the nearby tiny hamlet of Topli Do. Milinka revelled in the pure energy of this magnificent day and encourages others to come and visit Stara Planina. In the end, Milinka believes that people power will be the only thing that will save nature as they cannot wait for the state to act.

Hardly a day passes without Milinka visiting the river. On a quiet day, when she sits on the bank of the Temštica with her granddaughters, throwing stones into the flowing waters, she imagines the future, and knows she has made the right choice. Asked how she would celebrate if the hydropower companies packed up and left Stara Planina, Milinka responds “We will celebrate here, at the river, of course.”