Vienna, Radolfzell, March 20, 2014. As a contribution to this year’s UN World Water Day (22.3.) on the topic of “Water and Energy”, EuroNatur and Riverwatch draw attention to the impending destruction of rivers on the Balkan Peninsula. Disguised as green sources of energy, more than 570 hydropower plants (> 1 MW) are planned to be built between Slovenia and Albania. One of the most significant natural treasures of Europe is at stake. The Blue Heart of Europe is at risk of a heart attack. In order to prevent this from happening, EuroNatur and Riverwatch have launched the campaign “Save the Blue Heart of Europe”, which we present today in Belgrade.

“We have to stop this dam craze. Many of these projects violate EU laws, making their funding through international investors even more scandalous. Hydropower is not green but destroys precious natural landscapes” says Ulrich Eichelmann, CEO of Riverwatch – an international society for the protection of rivers. “Hydropower plants are being proposed without regard for nature and people, even in national parks. This is unacceptable and hampers the potential for sustainable economic development in the respective countries. Hydroelectric development must take aspects of nature conservation into account. A masterplan for the protection of the most valuable natural rivers in the region is imperative” says Gabriel Schwaderer, CEO of EuroNatur.

Nowhere else on the continent can one find such a tremendous number and variety of pristine, wild rivers, crystal clear streams, extensive gravel banks, untouched alluvial forests, spectacular waterfalls, and even karstic underground rivers. The Blue Heart of Europe beats on the Balkan Peninsula. This is what the extensive research, which was conducted by Riverwatch and EuroNatur in the last two years, confirmed.

The two organisations assessed the hydromorphology (the structural intactness of the river) of about 35,000 river kilometers on the Balkan Peninsula, researched existing and planned hydropower plants, and conducted a study on fish and mollusc (mussels and snails) biodiversity. The results are both impressive and alarming:

In cooperation with local partners in the respective countries and with the support from the MAVA foundation and the Manfred-Hermsen-Stiftung, EuroNatur and Riverwatch have launched the “Save the Blue Heart of Europe” campaign aiming to save this natural European heritage from destruction. The goals of the campaign are: 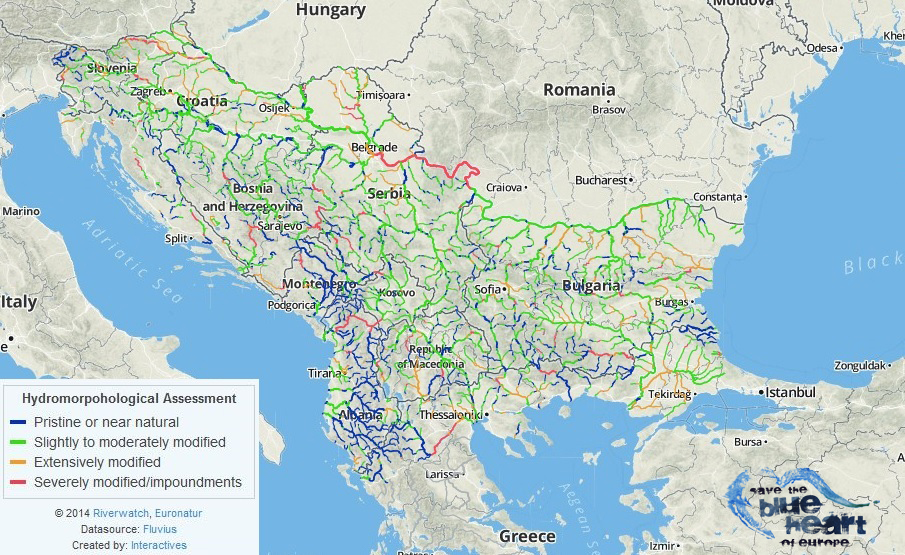